(I wrote this article for the Boston Globe and after much digging was able to find out that the ban was in place for 50 years.)

Italian cold cut connoisseurs are eagerly awaiting the arrival of imported salami, pancetta, coppa, and other pork salumi that have not been available in the United States for nearly 50 years.

On May 28, a ban on pork products in effect since 1963 was lifted by the US Department of Agriculture. The ban came about when the first of at least two contagious swine diseases was detected, according to Workabeba Yigzaw, a spokesperson for the department’s Animal and Plant Health Inspection Service. Last month, several Northern Italian regions were declared free of swine vesicular disease and therefore pose a low risk of contaminating pigs in this country, she explains.

Meats cured for less than 400 days from Lombardy, Emilia-Romagna, Veneto, and Piedmont, and the autonomous provinces of Trento and Bolzano should start showing up in this country within two to three months after meat producers are certified, according to Davide Calderone, director of Italy’s Industrial Association of Meat and Cured Meat Products.

“I already placed my order. I’m on top of their list,” says Guy Martignetti, owner of Salumeria Italiana in the North End.

“Culatello is one of my favorites and that comes from a variety of provinces within the approved region,” — Tim Bucciarelli, manager of Formaggio Kitchen.

Calderone says it has been a long process. It wasn’t until 1987 that the United States lifted the ban on imports of prosciutto and mortadella after it was proved that curing ham for at least 400 days kills the virus. When prosciutto di Parma was finally allowed into the country, Italian food connoisseurs celebrated.This time it’s the highly prized culatello that may elicit a cheer. Made from the same rear leg of the pig that prosciutto is cured from, but treated differently, culatello is more intense and creamier than prosciutto. “Culatello is one of my favorites and that comes from a variety of provinces within the approved region,” says Tim Bucciarelli, manager of Formaggio Kitchen.

Christina Theophanis, general manager of Dave’s Fresh Pasta in Somerville, said she’s been selling a very good Canadian culatello but is looking forward to getting the real deal, which should taste different. “Processes are so indigenous to the area,” she says. “Culatello from the Po River Valley, where it originated, would be wonderful.” Domestic versions of these products have been available, but Theophanis is looking forward to “all kinds of things that we don’t even see here.”

Dante de Magistris plans on buying soppressata. The chef and owner of Dante in Cambridge and Il Casale in Belmont, describes it as a simply made sausage containing ground pork, a little bit of fatback with spices, and fennel. Domestic soppressata, he says, “just doesn’t compare.” Alas, he may have to wait a little longer. The soppressata he loves comes from the southern region of Campania, where the ban is still in place. Cured meats vary widely from region to region in Italy, which means that soppressata from Campania will be different from soppressata made 60 miles away in Naples.

Calderone is hopeful that the US ban will be lifted in other regions, noting that the European Union has determined that nearly all of Italy is free of the disease. He is also hoping that the ban on Italian beef products will be lifted, after the USDA makes a final ruling on mad cow disease, expected at the end of the year.

Formaggio’s Bucciarelli gives high praise to some of the smaller US artisans who have copied the Old World ways. What makes great salumi in Italy is the same thing that makes it great in this country. “It’s a producer who understands that one leg is not going to work as well as another leg,” he says, “and so he only buys the leg that’s going to work well for the product he’s going to create. It has enough marbling if that’s what he’s looking for.’’

Calderone’s organization estimates that lifting the ban will add about $13 million in pork products exported to the United States. We already import $100 million of products.

For years travelers to Italy tried to smuggle salumi past airport officials. The ban will not ease this. Products will still not be allowed in personal baggage, according to Yigzaw of the USDA, a fact that won’t please de Magistris, whose father purchased a pig in Italy about a year ago.

“The pig will be slaughtered next week and they’re turning it into all different cuts of meat. I’d love to be able to bring that home,” he says.

If customs takes it, says the chef, “it would be a shame.”

Mark Micheli can be reached at markfmicheli@gmail.com.

This slow-cooker recipe is good for a weeknight meal or for a crowd to watch the big game. 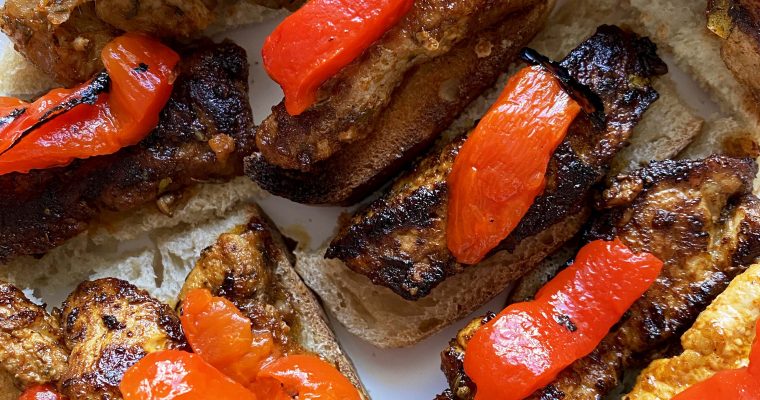 This authentic tapas dish is easy to make and the marinade of olive oil, lemon juice, thyme, paprika, and oregano makes it uniquely flavorful.