After the clock struck 12, and after the obligatory flute of champagne (actually it was an old bottle of Asti Spumanti that had been sitting in the RootsLiving wine cellar for 10 years), we ended the night last night with hot Tom and Jerry cocktails.

This very potent hot eggnog was a popular drink in the US and England from the mid-1800s until the Eisenhower administration (I think the swinging 60s with its tony martinis and “wallbangers” may have killed the Tom and Jerry craze). In fact it was so popular that many pubs were called Tom and Jerry’s. And it spawned its own glassware. Today you can still find Tom and Jerry punchbowl sets and mugs on sale on EBay.

I first learned about the Tom and Jerry cocktail about a year ago when Trish was reading a short story by Damon Runyon called, “Dancing Dan’s Christmas.” The story takes place in Good Time Charley Bernstein’s little speakeasy in New York City during prohibition on Christmas Eve where a few guys are drinking the wonderful concoction, including one dressed as Santa Claus who ends up passing out after his fifth.

Make no mistake: this cocktail demands respect, both in its drinking and in its making. Runyon’s narrator warns in the story that making a Tom and Jerry “is by no means child’s play. In fact, it takes quite an expert to make good Tom and Jerry, and in the days when it is not illegal a good hot Tom and Jerry maker commands good wages and many friends.”

Although this recipe is a little complicated and time consuming for a cocktail, it is worth it. Don’t be turned off by the sounds of the ingredients: they blend together deliciously, creating a not too sweet and frothy sensation that just might have you passing out in your Santa suit if you’re not careful.

In a separate bowl, beat egg yolks until light in color. Gradually beat in sugar, allspice, cinnamon and cloves.

Pour 2 tablespoons of this egg mixture into each of four 8-ounce mugs.

Add 1/2 jigger of brandy and 1 jigger of dark rum to each mug.

Top with grated nutmeg and serve.

(Don’t let anybody drive or work heavy machinery after this.) Here’s to a happy and healthy 2010!

(Photos, except for the mug of Tom and Jerry, by Tricia Micheli.) 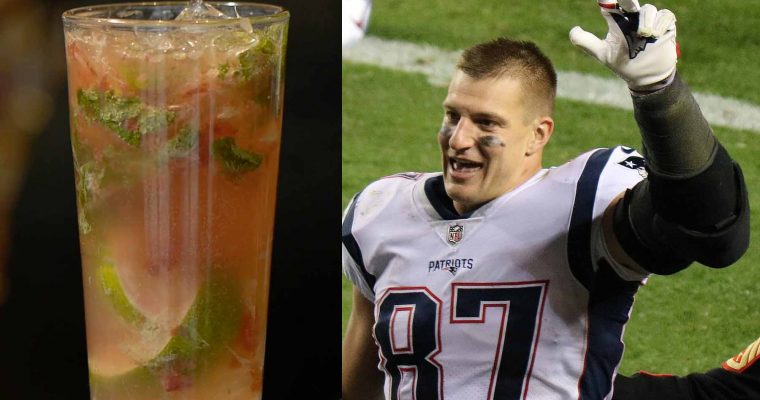 Beer is fine but if you’re looking for something else to drink to watch the big game on Sunday, this is the cocktail for Patriots’ fans.

This cocktail was one of the most popular at Cuchi Cuchi, a Spanish Restaurant in Cambridge, Mass. which closed its doors for good in May, 2020, a victim of the pandemic.